This August I was teaching mainly secondary school kids who had failed school English exams in June and had to retake them in September.

If you look at their coursebooks, they contain the usual mixture of lexis, grammar McNuggets, listening and so on. But if you listen to any of the kids, they express the syllabus entirely as grammar points: "El futuro, la pasiva, las tres condicionales,..."

So there I was, repasando la gramatica. Except that my kids couldn't get a grip on it.

[Possibly because state school teaching is devoid of meaning, engagement or even practice.] 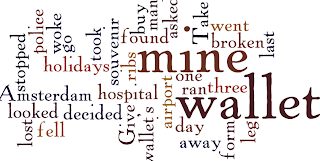 But also more simply, the kids didn't have any vocabulary. How do you expect a callow youth of thirteen summers to "do" a second conditional if they don't have the vocabulary to even find the verb? Or even know what the sentence is about. How can they if they don't know words as common as "ill" or "busy" or "dangerous"?

But, we managed to make some headway by doing plenty of group-writing in class. The following is a typical procedure I used:

We had been looking at a reading exercise based on an article about a slimming drug [ludicrous as it sounds] and had tried to consolidate vocabulary with a mind-map about health and illness. To follow this up, I boarded the phrase "How I Got Hurt" and challenged them to make up a short story, adding one word at a time round the class. With only a little intervention/guidance from me, we managed to come up with this on the board:

The last day of my holidays, we decided to go to Amsterdam. We stopped in the airport for a souvenir but we couldn't buy one because I had lost my wallet. So I went to the police and asked them for a form. They had found a wallet but it wasn't mine. Then we took it and I ran away but fell down. Then a man looked at my wallet and said "This wallet's mine! Take that! This is mine! Give it to me!"

I woke up in hospital with my leg and three ribs broken.

We followed up with a progressive rub-out-and-read exercise, which you can see here: 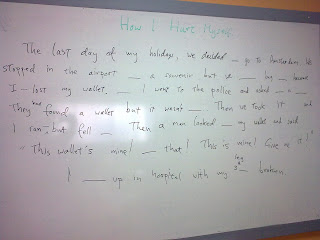 And as we were doing that, I realised that this would be a perfect story to act out. Though we didn't have long, we had time to perform it twice, which was perfect, given that there were six of us, and the story has three speaking parts.

I was a bit shocked to read this post by Mike Harrison just the other day, where he seemed to be arguing against personalisation. Then I actually read the thing, rather than just scanning it, and I realised we're on the same side. [Phew. Read the thing properly, Tait!] His exercises have an individual, rather than collaborative bias, but both let the mind do what it does best, which is to make connections.

Anyway, if you haven't tried collective writing before, do give it a go. You'll find that it's fairly easy to get the level of teacher guidance right, and apart from that, there's really nothing you need, except for a title. I have to say that the kids did seem to be turning up with a bit of enthusiasm rather than the usual academic trudge.