I've noticed that a post of mine, The Magnificent Seven has picked up quite a lot of views, since it was posted a couple of months back.
So, helped by my unperturbable students Lara and Fer, we've prepared a further magnificent septet for you and your class. Each of them has pronounced the same set for you. Click the link above for the in-class procedure.

Want to check? Fer has the solution:
And Lara has the instructions for your class:
Publicado por Unknown en 9:26 6 comentarios:

I don't claim to be an A-student 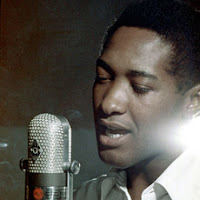 Like the great Sam Cooke, I don't claim to be an A-student. But here goes anyway...

How would you pronounce the A vowel in these words:

Where would they go on this diagram? 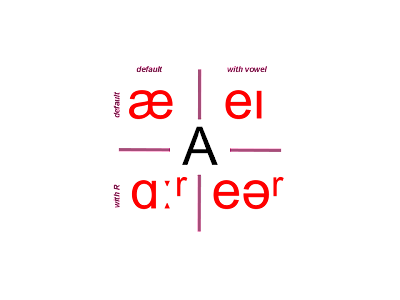 I'd put them into four groups, at least in standard British English:

And here's where I'd write them on the quadrant. (I won't fill each one in.) 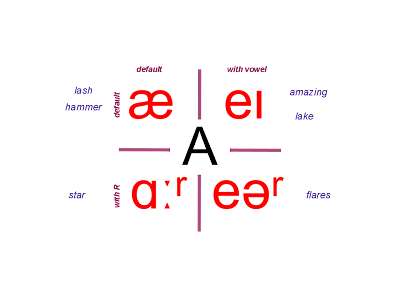 I've been noticing more and more recently that my students seem to be under the impression that there is no correspondence between spelling and sound; that there are no rules for spelling in English. A new word comes up in class (say "slate") and when I ask my students to guess the pronunciation, it's hit-and-miss between /sleɪt/ and /slæt/, with the occasional /slaɪt/ thrown in.

I know from my brother in the UK that my 7 year old nephew is doing phonics, and I've had a look at his classbooks. So I've been trying to formulate what I "know" as a native speaker, and get students to notice the patterns more. And after looking at a collection of samples, the quadrant helps to scaffold a bit.

Now I know that this isn't the whole story of A, but it's a good start. In fact, even getting student to grasp the top half of that quadrant is a huge improvement on guesswork. Pronouncing 'flares' as /fleirz/ or 'bark' as /bærk/ is close enough for most circumstances. The r-effect can come later, IMHO.

Do you teach letter-sound relationships? If so, how? I know the spelling guru Johanna Stirling touches on phonics, but I haven't found anything like this among her copious materials. If I've missed it, Johanna, please let me know!

Standard BE is not my native accent, I hasten to add, so I still feel a bit like a learner myself when it comes to this. In Scotland, most speakers have a central /a/ and an open front /e/ replacing /ei/, not to be confused with /ɛ/.

Also there is no big r-effect, maybe because it's just a separately articulated consonant, and not a kind of diacritic.

I think most Scots would say:

Do you have a non-standard English accent? And do you teach your own pronunciation or a standard model. I'd love to know. 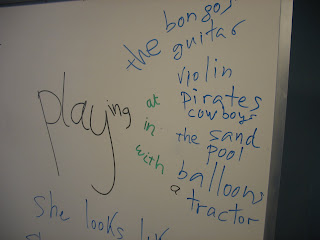 Thursday night is zombie night. So I've decided, anyway. My evening intermediate class are going to be doing Shaun of the Dead this month.

Warned them they wouldn't understand much, but not to worry - there wasn't going to be a test. A watch through the first 10 minutes or so of the film, without subtitles. Were they able to tell me anything about the characters or their interactions? Bugger all, really.

Scripts of scene one handed out. We read it several times, changing roles. Speaking slowly but as much acted as possible, reading for emotive content. Worked informally on linking and emphasis, especially on pronouncing phrases, not words. Developed the idea of Liz's frustration with Shaun. Then watched the relevant scene once more, again without subs.

All the scenes we read are from the first few minutes, in which the dynamics between the characters are established: Shaun is a thirtyish underachiever frittering his life away in a dead-end job. His flatmate/landlord Pete and longsuffering girlfriend Liz both berate his laziness and his attachment to the porcine, disfunctional Ed, long-term potato on their couch.

Mission accomplished? I think so far so good. When the hour was up, my protegés had made modest progress with really dense, rapid, colloquial English, both in production and reception. They had got a handle on the character dynamics, which are really the key to the comedy, at least until the shambling undead arrive.

But that will be next week.

Till then, keep those windows and doors shut.

EDIT: If you'd like the scripts for these scenes, join edmodo and send me a connection request. Sandy has blogged about it here.
Publicado por Unknown en 17:36 6 comentarios: